If you’ve ever been in an accident that involved another vehicle, you know how traumatic and damaging it can be. Now, imagine that experience amplified by about 100. That’s what it’s like being involved in an accident with a large truck.

Read on to learn about truck accident statistics in the United States.

According to the Insurance Institute for Highway Safety (IIHS), Highway Loss Data Institute (HLDI), the majority of fatalities that result from trucking accidents tend to be occupants of passenger vehicles. The issue here is that people in smaller vehicles are more vulnerable to those around them.

It’s typical for large trucks to weigh 20-30 times more than passenger vehicles. In addition, they’re taller with a higher ground clearance, which has the potential result of smaller cars underriding trucks in wrecks.

In 2018, a total of 4,136 people lost their lives as a result of large truck accidents. These deaths are broken down like this: 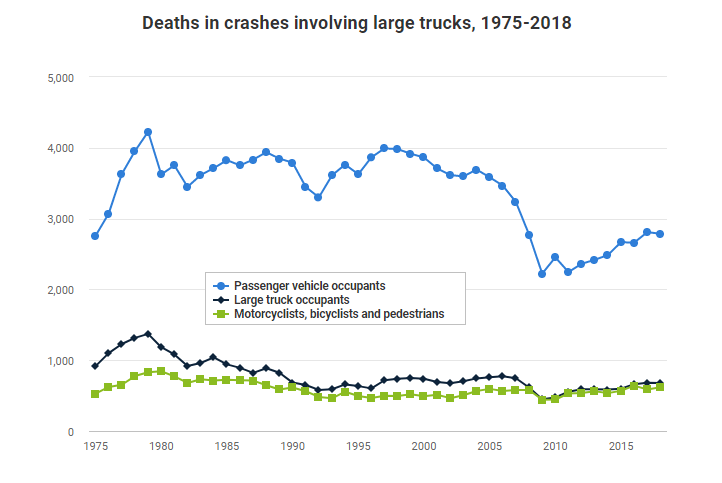 As you can see from the graph above, the number of passenger vehicle deaths from truck accidents far exceeds truck driver fatalities. That’s why it’s so crucial to give trucks the time and space they need to drive safely.

If you’re driving a car, you’re much more likely to die as a result of an accident with a truck than the truck driver is.

According to the American Trucking Associations, the vast majority of truck accidents are prompted by passenger vehicle drivers as opposed to truck drivers.

If you’ve been involved in a truck accident and you sustained injuries as a result, our team may be able to help you recover the damages that are rightly yours. Don’t hesitate to contact our firm with your case right away.

Call us today at (866) 675-4427 to have an experienced Stuart personal injury attorney from Lauri J. Goldstein & Associates, PLLC evaluate your case.